Following a delicious beef stew lunch provided by Linda and breads and all the goodies on the dessert buffet provided by members, we moved to the library and settled down for our main event of the day—our 2018 challenge show and tell.

But first we had an extremely productive business meeting during which we came up with plans for our programs for the coming year and discussed the possibility of holding a workshop in 2019.  Among the program ideas were having one on fringes in February, which Sharon would lead; the possibility of a presentation by a visiting fiber artist in March on Icelandic weaving; and inviting Kathy B. back to present a program on growing plants for natural dyes. Kathy, a one-time member, is sorely missed.

Stay tuned as more possible program ideas are explored.  They will be listed in the sidebar on the right-hand side of each website page.

For many years our Guild members have demonstrated their skills at a number of historic sites throughout the Sandhills and the possibility of adding The House in the Horseshoe, a Revolutionary War site, was discussed.

Then on to showing the scarves we made for last year’s challenge, which was to use yarn from Barbara’s stash to weave a scarf. Everyone brought something beautiful, and each piece had a story. 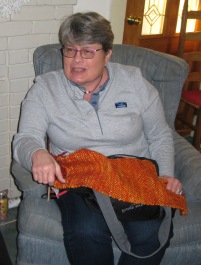 Diana wowed us all with her scarf story

Diana’s was so great, we just had to include it here–what ingenuity!

She was the last person in the guild to share her challenge project and claimed to be a real procrastinator. She said she started on her scarf just after New Year’s Day.

She lifted her bag and said, “I really disliked the red (burgundy?) colored wool yarn that came in the paper bag, but I also got cream colored roving. I took the roving to the dyeing workshop at Nancy’s house. At the workshop, I chose to dye the cream roving orange. Just hoping it would go well with the ugly red yarn. It was still in the original package form, and I ended up with a variegated orange.”

Next out of the bag was a wooden heddle. “I wanted to try a back-strap loom with this heddle, which I had to order. And from there on out I thought I could improvise. I found a single piece of dowel but needed another one. However, it was lost somewhere in the garage. So I used a paint stirrer that my husband found. See it has paint on it. I also found a big red bungee cord to use as a back strap. This is where my handy blue painters tape was helpful to keep the bungee hooks on the paint stir stick. I found an afro comb that was bought to use with the pin loom, and I had a small shuttle so now I was ready.

My effort at figuring warp length by using the formula was a fail. So, my scarf is really short!”

That’s what makes this show and tell so extraordinary; It showcases our Guild’s creativity.

And, finally, the time came to reveal our 2019 challenge.  Jackie had written a delightful verse which posed the question, “Who am I.”  And our challenge is to create something that captures the very essence of who we are.

A note from Nancy, following up on a question that came up during lunch at our Rock Day Celebration:

Velvet: primarily polyester, rayon and silk as well as blends of the three. Blends don’t necessarily reflect a lower value proposition as much as they do desired effects. For example, devoré, a type of embellishment whereby fiber is eaten away, requires a cellulous (rayon or acetate) based pile to the render the effect. Velvet is generally drapier and more likely intended for wearing apparel. Knit silk velvets have become quite popular but the pile tends to be a bit shorter than traditional velvet. In all cases, velvet pile is a bit longer than velour or velveteen with the desired effect of a standing pile.

Velveteen: tends to be stiffer, usually cotton or a cotton blend with a shorter, stiffer hard pile that lies flat (akin to corduroy).

Velour: while previously known as a stretch fabric, woven velours are commonly used in home furnishings, car interiors etc. The pile is typically midway between velvet (the longest) and velveteen (the shortest). Of the three, velour pile is easily the densest.

In a salute to Canada, Nancy knitted a maple-leaf motif hat and wove a red and white striped scarf

Laura spun the silk for her beautiful knitted lace stole

Teresa wove a spectacular red, white and blue scarf with basket weave in the back

Diana dyed some of the yarn and then wove without a loom and definitely had the best story to tell!

Linda used hand spun cashmere and alpaca for her scarf